Since its founding 60 years ago, Los Angeles Sanitation and Environment’s (LASAN) core mission has been the protection of public health and the environment. Evolving through the years, LASAN has garnered strong standing as a world-class environmental leader.

In the late 1800s, wastewater from Los Angeles traveled untreated into the ocean. Fred Eaton, considered by some to be the father of wastewater in Los Angeles, designed the first comprehensive sewer system for the City in 1887. To address the increasing population, the City purchased 200 acres of oceanfront property (the Hyperion site) in 1894 as part of a larger planned sewer system for the region. From 1894 to 1950, the City followed the national standard of discharging raw sewage into the Santa Monica Bay. While this practice protected public health in the thriving city, it was detrimental to its receiving waters. The City built and operated its first treatment facility in 1925, which used preliminary treatment processes until 1950.

Hyperion was the first large secondary treatment plant on the West Coast, and one of the most modern facilities in the world.

During World War II, several miles of beachfront property surrounding the Hyperion site were quarantined because of near-shore discharge of raw sewage. After the war, a secondary treatment plant at the site was planned, funded, and built. When the new Hyperion Treatment Plant opened in 1950, it included secondary treatment processes and biosolids processing to produce a heat-dried fertilizer. It was among the first in the world to capitalize on the energy value of biogas by operating anaerobic digesters, which have yielded a fuel gas by-product for about 70 years. At the time, Hyperion was the first large secondary treatment plant on the West Coast, and one of the most modern facilities in the world. But population growth and higher flows made it hard for LASAN to maintain treatment levels so, they were cut back, and by 1960 the plant was discharging water of mixed quality five miles into the ocean.

Since the system of biosolids-to-fertilizer was not working well, Hyperion stopped it and began discharging 25 million pounds of wastewater solids per month into the Santa Monica Bay. This began to take its toll on marine life. Samples of the ocean floor from discharge areas demonstrated that the only living creatures capable of sustaining life after 30 years of this practice were worms and a hardy species of clam. The City launched a $1.6 billion construction program to replace the sludge disposal with full secondary treatment in 1980. This program replaced nearly every 1950-vintage wastewater processing system at Hyperion while the plant continuously treated 350 MGD of wastewater and met all National Pollutant Discharge Elimination System (NPDES) permit requirements. 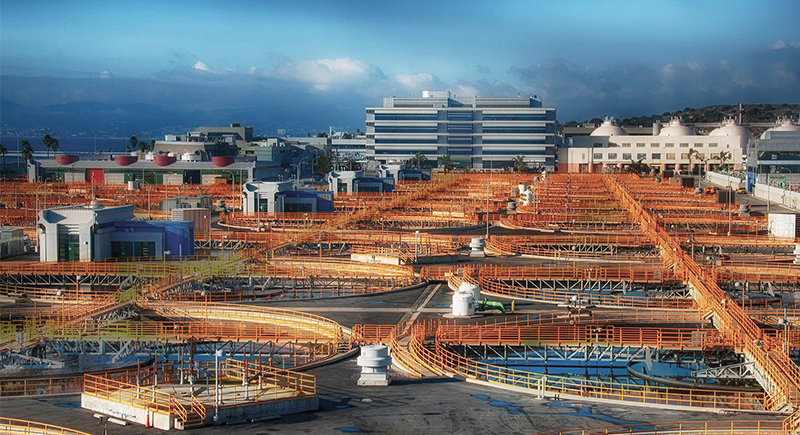 The City has invested billions of dollars in new treatment technologies and has implemented the most stringent operating procedures in history. Having provided full secondary treatment since December 1998, the Hyperion plant is the largest of four water reclamation plants in Los Angeles, treating an average flow of 260 MGD of wastewater for four million people.

According to a report from the Southern California Coastal Water Research Project, “pollutants from wastewater treatment plants…have declined…over the last 40 years…because these “end-of-pipe” facilities were a primary target of the Clean Water Act…toxic substances from these sources have decreased more than 95%, despite a doubling in [the area’s] coastal population.”

LASAN has been a major contributor to that turnaround. The current system was completed in 1998, immediately resulting in a 95% reduction of wastewater solids flowing into the Bay, elimination of the Bay’s ecological dead-zone near the mouth of the outfall; vast improvements in the bottom-dwelling marine community, and increases in the number of indicator species.

Los Angeles is the largest municipal agency in the country that converts sludge into biosolids that can be used as fertilizer and soil amendments. LASAN’s bioenergy facility generates electricity and steam to meet the plant’s power and heating demands. The facility, which began operation in 2017, generates 20 MW of power, which is enough to power 30,000 homes daily. Recovering the methane gas from biosolids reduces greenhouse gas emissions by 95,000 tons/year—equivalent to taking 20,000 cars off the road. 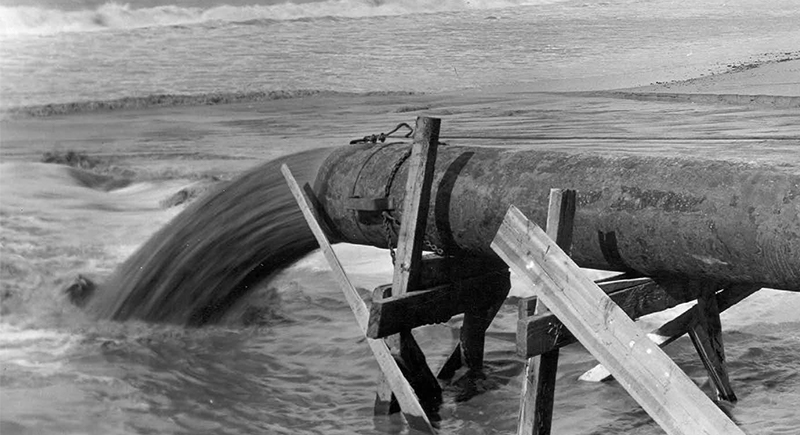 The Los Angeles Environmental Learning Center (ELC) at Hyperion, which opened in 2013 and is free to the public, educates stakeholders about sustainable water and solid resources management as a catalyst to change behavior. Information is shared about LASAN’s infrastructure, programs and people, and how they are improving the environment. The ELC is LEED certified and includes educational interactive exhibits, an indoor patio, an 87-seat auditorium, a learning laboratory, a conference room, a green roof, wetland and other sustainable features on two acres of land.