Setting the Bar High for Public Outreach and Community Engagement

LOTT Clean Water Alliance provides wastewater treatment for residents of Lacey, Olympia, and Tumwater in Washington State. LOTT’s main plant, the Budd Inlet Treatment Plant, is located at the southernmost tip of Puget Sound. Prior to 1952, untreated wastewater was discharged to Budd Inlet, contributing to poor water quality and unpleasant odors, especially at low tide. After the City of Olympia began operating the Budd Inlet Treatment Plant in 1952, local water quality improved, but it was still a concern, especially as the population increased.

In response to federal and state grants made available to support the objectives of the Clean Water Act, a formal partnership was formed by Lacey, Olympia, Tumwater, and Thurston County in the mid-1970s. Known as the LOTT Alliance, the partnership enabled cooperative use and development of the Budd Inlet Treatment Plant and initiated an intergovernmental planning process for major treatment plant upgrades. In the mid-1980s, the plant was upgraded from basic primary treatment to secondary treatment, and in the mid-1990s, nitrogen removal and ultraviolet disinfection were added.

Proactive public outreach is viewed as integral to the success of LOTT’s mission.

In 2005, LOTT and its Board of Directors made plans to come out from “behind the fence” and created a new education program and community educational amenities, investing $5.75 million in the public amenities over ten years. They built a LEED platinum certified building for office space and a new education center called the WET (Water Education and Technology) Science Center. They hired dedicated environmental education staff and developed formal partnerships with three local school districts. This represented a significant investment and commitment to proactive public outreach which is viewed as integral to LOTT’s success. The WET Science Center hosts an average of 4,000 students a year. Education programs teach students about cleaning water, protecting water quality, conserving water, and career options in the wastewater field. The WET Science Center also offers free interactive exhibits and programs open to the public. Today the WET Center hosts close to 20,000 visitors annually. 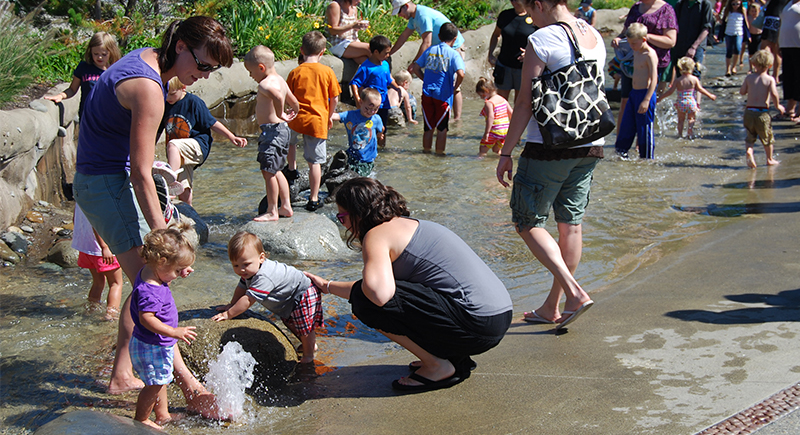 LOTT’s East Bay Public Plaza is another unique, popular destination for the community, designed to create an inviting, safe, vibrant public space. The focal point of the main plaza is a stream-like water feature that is fed by reclaimed water produced at LOTT’s nearby reclaimed water plant. Visitors are invited to splash and play in this urban “stream” to see that reclaimed water is safe, clean water. Across the street, a demonstration habitat site features a small wetland also fed by reclaimed water that supports aquatic vegetation and wildlife. The plaza was developed as a joint effort of the LOTT Clean Water Alliance, Port of Olympia, City of Olympia, and the Hands-On Children’s Museum. The Plaza supports the East Bay district’s educational theme and reflects the importance of water to our communities, our health, and the environment.

Budd Inlet is a narrow inlet with water quality impaired from a variety of non-point and other sources. As the only point source discharge into the inlet, LOTT’s treatment plant discharge is strictly regulated and represents only about 3% of the nutrient loading to Budd Inlet. The Budd Inlet Treatment Plant adheres to a higher level of treatment than nearly all other treatment plants along Puget Sound.

LOTT produces up to three million gallons of reclaimed water per day. Biosolids are produced onsite and delivered to eastern Washington for reuse as a soil amendment. Methane and other biogas from LOTT digesters are used to produce both heat and electricity. The electricity powers LOTT’s Regional Services Center, saving around $150,000 in electric costs annually. 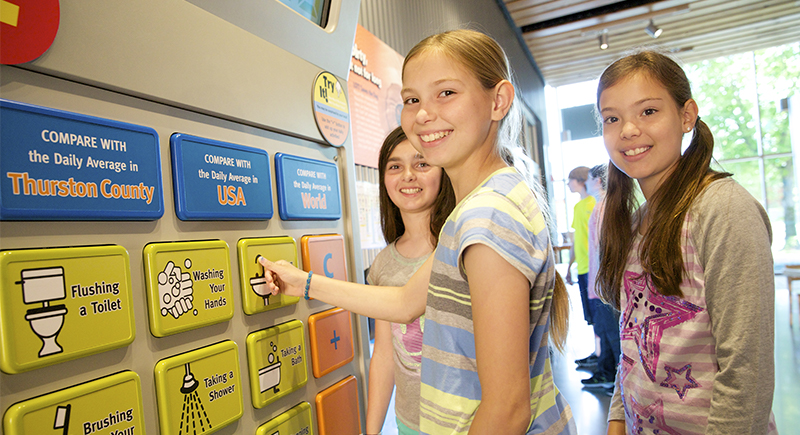 LOTT and its partners’ investments in the East Bay district helped spur other investments, including a new mixed-use retail and apartment complex scheduled for completion in 2020, which is predicted to generate significant economic benefit to the community. LOTT’s Capital Improvement Plan includes an estimated $131 million for system improvements from 2019-2024. In addition to sustaining LOTT’s infrastructure, this investment supports hundreds of jobs for numerous support services.