Revitalizing the Most Impaired River in the Nation’s Capital

The Anacostia River begins in suburban Maryland, meandering through the District of Columbia on the east side, eventually flowing into the Potomac River at the southern tip of DC. In pre-colonial times, the river and its confluence with the Potomac was the home of a thriving Native American community. In the 16th and 17th centuries, the river allowed ocean-going ships to reach Bladensburg, Maryland, which became a major shipping center for tobacco, cotton and corn. However, in the 1800s and 1900s development had severely affected the health of the river with sedimentation, sewer overflows, and urban runoff. The Anacostia River became known locally as “the forgotten river.” Steeped in history, and with great potential for the future, the Anacostia is today being revitalized with a distinct mission for clean water and environmental stewardship. DC Water plays a central and significant role.

The improved health of the waterway is bringing a renaissance to the Anacostia waterfront.

The Clean Rivers Project is DC Water’s $2.7 billion program to control combined sewer overflows (CSOs). While the project will control CSOs in all three of the District’s waterways, the Anacostia River is a principal focus. The project is a massive infrastructure construction program designed to capture and store excess combined sewage during rainfalls rather than allowing it to discharge directly to the receiving waters. Captured flows are delivered by gravity to the Blue Plains Advanced Wastewater Treatment plant for treatment before being discharged to the Potomac River. The program, to be constructed over a period of 25 years in accordance with a Consent Decree entered between the Federal government, District of Columbia government, and DC Water, will reduce CSOs by an estimated 96% system-wide by volume in an average rainfall year, with a 98% reduction for the Anacostia River. The project consists of a series of deep underground tunnels to capture and store CSOs, with green infrastructure in select areas.

DC Water began tunneling along the Anacostia in 2011 and, beating the budget and the deadline, placed the first portion of the tunnel into service in 2018. The seven-mile tunnel segment captures combined sewage that otherwise would discharge into the Anacostia River. The backbone of the system, this 7-mile, 23-foot diameter network of tunnels, provides over 105 million gallons of CSO storage. At Blue Plains, a deep underground pumping station and new treatment facilities were constructed to process the water delivered by the tunnel. 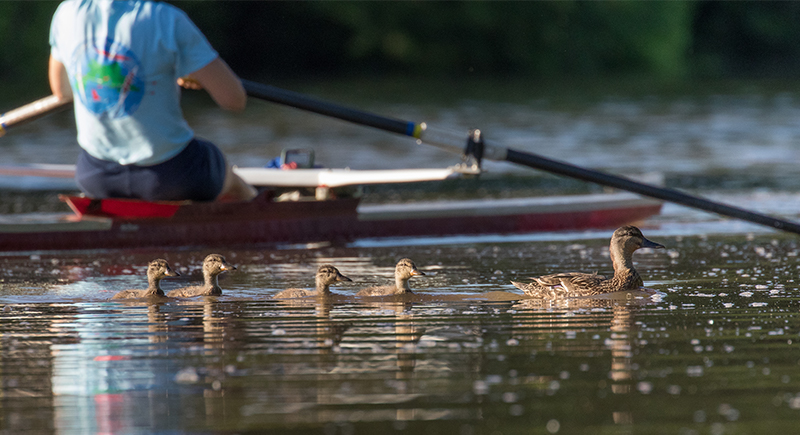 Rower and ducks on the Anacostia River. Photo by Krista Schlyer.

Between March 20, 2018 and June 8, 2020, the Anacostia Tunnel captured more than 7.7 billion gallons of CSO, removed more than 3,800 tons of trash and other debris and provided a 90% capture, exceeding the predicted 80% CSO removal at this stage of completion.

The Northeast Boundary Tunnel is the last phase of the project to be completed. This tunnel will add approximately 90 million gallons of storage to the whole system and is scheduled to be on line in 2023, increasing capture from 90% to 98%. 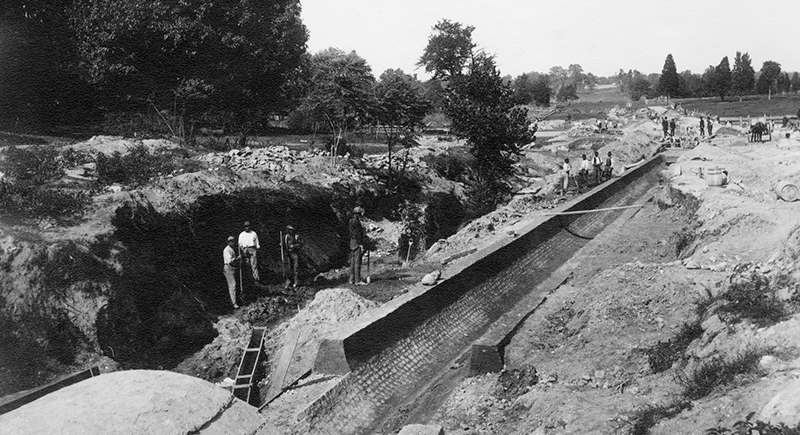 The improved health of the waterway is bringing a renaissance to the Anacostia waterfront from housing, retail and sports venues, to recreational and environmental opportunities. DC Water’s project support the goals of the Anacostia Waterfront Initiative (AWI), a collaboration of District agencies, and non-profit, federal, and regional partners to realize the potential of the Anacostia waterfront. In addition to Nationals Park and the new Audi Field, mixed-use development will bring tens of thousands more residents and employees to the area. Spanning 30 years and comprising $10 billion worth of investment, the AWI pledges to restore and revitalize the Anacostia River.

The cleaner river is seeing a resurgence in wildlife and marine species. Ospreys and heron have returned, and fish populations are growing. The District named 2018 as the Year of the Anacostia, hosting hundreds of events and launching a campaign urging residents and visitors to “Come to the River.”

Many more people are enjoying the beauty and tranquility of the Anacostia, as rowers, sailors and water enthusiasts are discovering this natural treasure right in the heart of the nation’s capital.