Cereal Capital of the World Taps Technology, Investments, and Partnerships for Cleaner Water

28,539 acres of nutrient and flood management

Cedar Rapids, thought to be settled in the early 19th century along the banks of the Cedar River, was named for the river’s velocity and the red cedar trees that lined it. It was a prime spot for milling, as the goods they created were easily and swiftly carried down the river to the Mississippi. In fact, Cedar Rapids is home to an oatmeal mill that would ultimately become the largest cereal mill in the world and the flagship operation of the Quaker Oats Company. This and other industries are reliant on clean water services to exist.

The City of Cedar Rapids and the State of Iowa have a long history of innovations in the clean water arena. Cedar Rapids was one of the first American cities to adopt rapid sand filtration (a rudimentary way to purify water) in 1896. It was also the first city in Iowa to treat sewage in an all-inclusive basis and pioneered joint treatment with industries, completing construction of its first sewage treatment plant in 1934. The facility that replaced these early treatment plants, the Cedar Rapids Water Pollution Control Facility (the Facility) is one of the few advanced wastewater treatment facilities in the State of Iowa. The Facility provides three treatment levels plus final disinfection and dichlorination, and was 90% funded through an EPA grant in 1975. Cedar Rapids was early to recognize and accept domestic and industrial waste problems at the outset of a statewide effort to clean its streams of pollution.

In total, the Middle Cedar Partnership Project could provide $4.3 million in financial and technical assistance over its lifetime.

As a city within the Midwest Bread Basket, agricultural processing fuels the economy and uses a substantial number of commodities every day — more than 100,000 bushels of soybean and 1.4 million bushels of corn. In addition to serving its 133,000 residents, the Cedar Rapids Utilities Department provides pollution control to the cities of Hiawatha, Marion, and Robins and serves many heavy industries, several of whom have agricultural ties. Both types of customers rely on safe, clean, and reliable drinking water and wastewater treatment capabilities. As the cereal capital of the world, it’s safe to say the Cedar Rapids community depends on clean water. To this end, the facility’s Pretreatment Program works directly with the industries by permitting and monitoring industrial discharges to protect the Cedar River.

The Facility plays an important role in protecting the health of the Cedar Rapids community. When it was damaged during a major flood in 2008, it became clear that flood protection was needed. After addressing $89 million in damages to the Facility, the City invested approximately $22 million to protect it from future flooding. Focused on nutrient reduction, improving solids handling, and resource efficiency, the Utilities Department plans to invest $427.6 million from 2020 to 2037. The improvements include plans for biogas recovery to provide heat and power and selling biosolids for use as a soil amendment and recovered phosphorus for use as fertilizer. 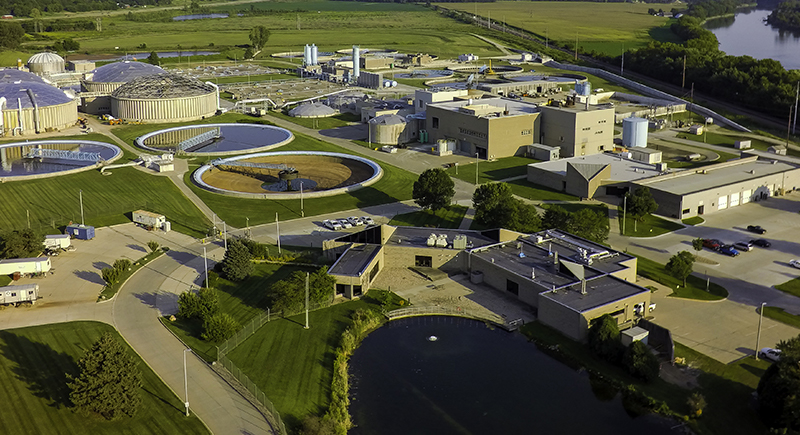 The major flood of the Cedar River in 2008 caused heavy damage, and flooding continues to impact multiple communities within the watershed. Further, in part due to increased concentrations of nitrates, the Iowa Water Resources Coordinating Council (IWRCC) designates the Middle Cedar watershed as one of nine priority watersheds under the Iowa Nutrient Reduction Strategy.

In 2015, the City of Cedar Rapids began an innovative urban-rural partnership to engage farmers and upstream partners to help improve water quality, water quantity and soil health of the Cedar River Watershed. The Middle Cedar Partnership Project (MCPP) brought together 16 partners, including local conservation groups, smaller watershed authorities, state agencies, and farming associations. The city has invested $303,343 to date in outreach, education, and water quality analysis for the MCPP. In total, including investments by the other partners and the USDA’s Regional Conservation Partnership Program, the MCPP could provide $4.3 million in financial and technical assistance over its lifetime. Since it launched, the partnership has helped farmers and landowners implement best nutrient-management and flood-reduction practices throughout 28,539 acres.

Cedar Rapids Utilities’ investments and collaboration with stakeholders has resulted in dramatic reduction in impaired waterways. The Facility removes 95-99.9% of carbonaceous biochemical oxygen demand (CBOD) and total suspended solids (TSS), and data through 2020 shows 2,673 acres have successful nutrient management with reductions in nitrogen, phosphorus, and sediment.

Data provided by the USDA Agricultural Research Service and Iowa State University show value in the MCPP implementation. In the Middle Cedar, fields with cover crops have averaged 32% lower nitrate concentrations than fields without, as measured over three growing seasons (2014–16) and a variety of weather conditions. Monitoring of water flowing through Middle Cedar wetlands showed nitrate concentrations 84% lower than stream observations over the same period.